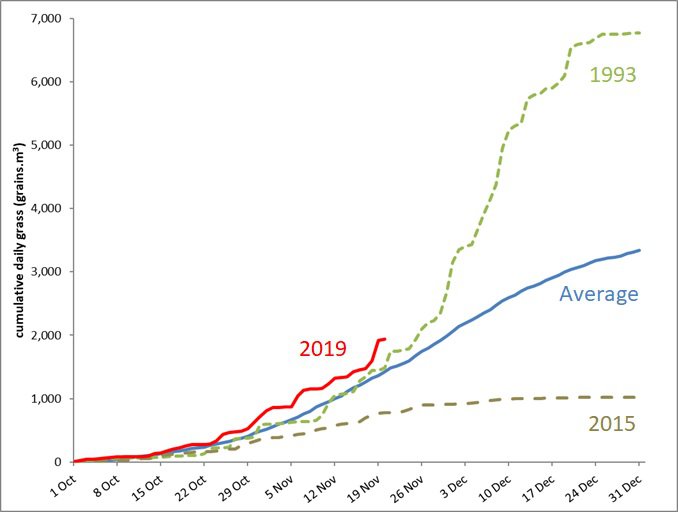 Here at Melbourne Pollen we count the grass pollen level and make a forecast every day from October 1 through to December 31.

As we're now 51 days in and well passed the season's halfway mark, it's time to let you know how the season is progressing.

In September, we had a look at the season ahead and forecast that 2019 would be a bigger grass pollen season than last year's rather mild season.

How did we go with that forecast?

One way to assess the season is to look at how many high and extreme days we've had.

So that's looking close to an average pollen season.

Another way to see how the season is stacking up is to plot the cumulative grass pollen count since October 1. Today's figure shows that plot.

The current season is the red line, the blue line the 28 year average for Melbourne, and the two dashed lines are 1993, our worst season, and 2015, our mildest season so far.

While that might look like we're in for a monster season, that's probably not the case as the forecast is for below average rainfall through to the end of the year.

That means we're expecting the cumulative count will start to flatten off sometime in December as the grasses start drying off.

But looking ahead, we're forecasting an extreme grass pollen day for tomorrow, Thursday, which looks like being pretty nasty with strong northerly winds ahead of a cooler change later in the day.

Our forecasts are updated daily so check the Melbourne Pollen app or website for the latest information.