We’re now at the midpoint of Melbourne’s grass pollen season, a season that typically peaks in mid-to-late November and then declines as the end of the year approaches.

In early October, we forecast an average grass pollen season for 2021 based on prevailing conditions at the time.

However, we cautioned that the Bureau of Meteorology’s forecast of a La Nina event could affect this prediction. Specifically, further spring rainfall should lead to increased grass growth and more abundant flowering, resulting in a heavier grass pollen season. 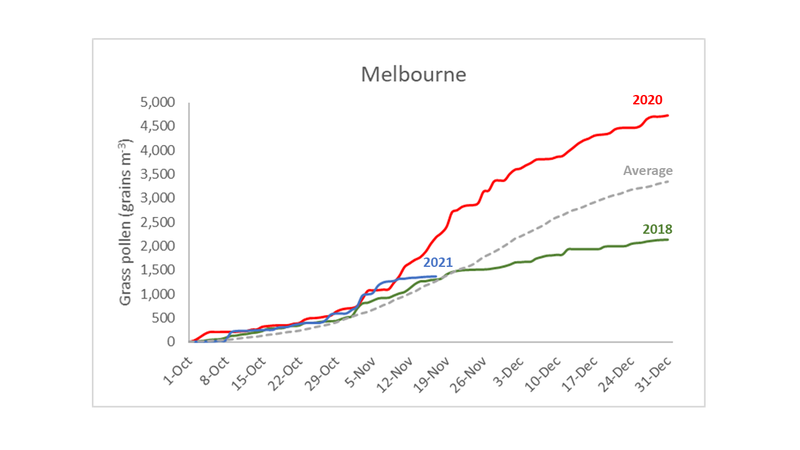 But while spring this year has certainly had a very wet finish, all that extra rainfall so far hasn't delivered too much extra grass pollen.

So, based on the number of high and extreme days, 2021 is still looking like an average grass pollen season.

We can also check how the season’s going by plotting the cumulative grass pollen count since October 1. That’s what’s shown in today's graph.

The current season is the blue line in the graph and Melbourne’s long-term average is the dashed grey line.

While early on, the 2021 grass pollen season was tracking the 2020 curve, since November 8 the curve has flattened and come back closer to the average.

But, with all the rain, why hasn’t 2021 seen a bigger grass pollen season like last year’s La Nina season?

Basically, while La Nina’s rain can set up the potential for a bigger grass pollen, what it’s delivered lately in addition to rain has been cooler conditions and mainly southerly winds.

Southerly winds don’t favor the movement of grass pollen into Melbourne from the surrounding countryside and the rain helps wash out whatever grass pollen there is in the air.

To give this some context, at this time of year we can expect lots of high and extreme grass pollen days, a few a week on average. But as of today, Melbourne’s last high day was more than a week ago, on November 7.

We’re forecasting today will be Melbourne’s next high grass pollen day, a gap of 11 days since the last high.

So, you can thank La Nina for any recent improvement in your hay fever or asthma symptoms.

That said, we’re not done with 2021 yet as our experimental long-range forecast model is predicting around another seven high and five extreme grass pollen days for Melbourne before the end of the year.

We’ll update you again in our end-of-year season wrap up or as any new information comes to light, and next week take a look at what’s happening with grass pollen elsewhere around the state.

In the meantime, keep checking the Melbourne Pollen app and website for the latest information.