As we're now 50 days in and well passed the season's midway mark, it's time to let you know how things are progressing.

Here at Melbourne Pollen, we measure how much grass pollen is in the air and make a 7-day forecast every day from October 1 through to December 31.

In September, we had a look at the season ahead and forecast that 2020 would be an average grass pollen season.

But we cautioned that the Bureau of Meteorology’s forecast for a La Nina year could change this, with good finishing spring rains having the potential to further boost grass growth.

A wetter-than-average October seems to have delivered that extra growth.

One way to assess the season is to look at how many high and extreme days we've had.

So, that's looking like 2020 will be an above average grass pollen season.

Another way of tracking the season is to plot the cumulative grass pollen count since October 1. That’s what we show in today's graph. 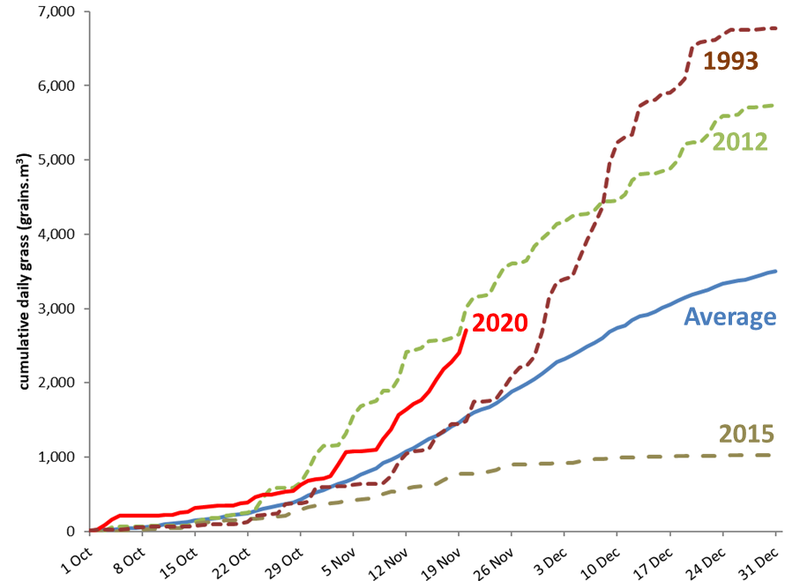 The current season is the red line and the long-term Melbourne average is the blue line.

The dashed lines show 1993, our heaviest grass pollen season, and 2015, our mildest season.

As you can see, the cumulative count for 2020 is currently above Melbourne's long-term average and even above the 1993 season.

But we’re still expecting the season will level off towards Christmas, as it does in an average season and as it did in the 2012 La Nina season.

That said, we’re not done with 2020 yet. In fact, a new and experimental forecast model we’ve developed predicts that Melbourne will experience another eight high and seven extreme grass pollen days over the remainder of the season.

We’ll see how good that prediction is in our end-of-year season wrap up.

In the meantime, keep checking the Melbourne Pollen app and website for the latest information.