Who's been getting up your nose this September?

Since September 1, we’ve been counting pollen on a daily basis at the Parkville campus of the University of Melbourne.

We don’t usually do this. Mostly we count grass pollen. 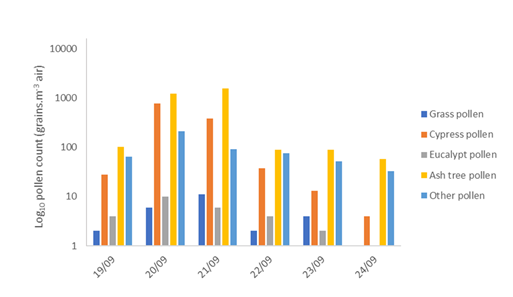 Grass pollen won't be a major feature of Melbourne's air until later in October, and it's important because grass pollen causes most of the hay fever and asthma problems toward the end of the year.

But we know that there are lots of people who start to experience seasonal allergies in September, well before the grass pollen season has begun.

This year we thought we’d look at what might be causing these early spring allergy problems.

Today’s graph shows that in the past week there’s been lots of tree pollen in the air. Note that the vertical axis in the graph has a log scale, which means each unit going up is 10 times bigger than the one before it (1, 10, 100 …).

So we’ve seen a little bit of grass pollen, some eucalypt pollen and lots and lots of ash and cypress pollen.

For example, the average daily concentration of ash pollen recorded at 9am on Saturday September 21 was a whopping 1,500 grains per cubic metre of air.

To put that number in context, if we see 100 grains of grass pollen per cubic meter of air, then we know that most people with hay fever or asthma will be experiencing symptoms. That sort of level of grass pollen is called an extreme day and makes for a very bad day for hay fever.

Friday and Saturday last week there was more than ten times that amount of ash pollen in the air over Parkville.

That sounds bad but was it a bad hay fever day as well? The problem is we don’t know.

But the hay fever survey in the Melbourne Pollen app can help us find out.

By downloading the app and submitting a daily symptom score, you’ll be helping to identify what September's bothersome pollen types are. And we can then help you by telling you when that pollen is in the air.

The rest of Victoria’s pollen monitoring sites will come on line on October 1 and will operate daily through to December 31.