An unusual combination of weather conditions leading to a freak illness known as thunderstorm asthma has left four people dead in Australia.

Thousands of people were rushed to hospital Monday with breathing problems in the southern Australian state of Victoria as emergency services struggled to cope. Three were still in a critical condition Thursday, a Victorian Department of Health spokesman told CNN.

During a four hour period Monday, Ambulance Victoria received more than 1,900 calls, or one call every four to five seconds. An extra 60 ambulances were deployed, as well as police and firefighters.

Edward Newbigin, a professor of biosciences at the University of Melbourne, said that many of those affected in Australia this week may never have had an asthma attack before.
"I imagine it was absolutely terrifying," he said.

Of more than 2,500 people surveyed by the university, 74% said they experienced asthma during the storm. Of those, 32% had never experienced an asthma attack before. 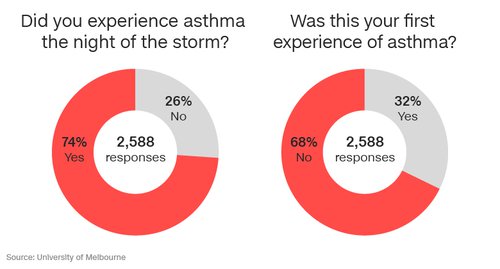