The season so far

In an earlier blog I used satellite imagery to forecast that 2016 would be a heavier than normal grass pollen season.

As the latest BoM images are showing lots of green across the Victorian countryside, my prediction still stands.

To put 'worst' and 'mildest' into some perspective, there are 92 days between October 1 and December 31, which is the period we count. So in 1993 the average grass pollen count was over 70 grains per day. That’s well into the high range and on a high day it's likely all people sensitive to grass pollen will experience hay fever symptoms. By comparison, in 2015 the average daily count was only about 11, a number comfortably in our low range of grass pollen counts. Most people will not experience hay fever symptoms on a low day. 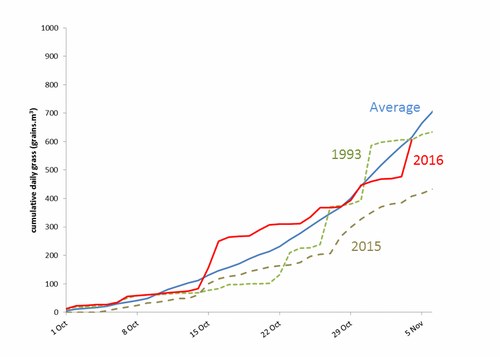