A quick look at Creswick and Melbourne

What was in the air lately?

Here's a quick look at what was in Creswick's air for the first couple of weeks of November. Dates are across the top and the numbers show the daily count for eight different pollen types and one type of fungal spore (Alternaria).

Each square is coloured to indicate how much of that pollen type was seen, with greener squares indicating more pollen.

The right-hand side of the table is clearly a lot greener than the left-hand side, which probably reflects a couple of things.

First is the cool start to November when temperatures were hovering in the teens for the first week. But maybe also some of the local vegetation really started hitting it's straps as far as flowering is concerned later in the month.

By November 15, there were impressive levels of a few different types of pollen, most notably Myrtaceae (gum trees and bottlebrushes) but also cypress, Casuarina (sheoaks) and grass.

From November 12 - 15 grass pollen levels in Creswick were in the extreme range (greater than 100 grains) and the chance of thunderstorms on November 15 resulted in an increased risk of thunderstorm asthma for the surrounding area.

Speaking of grass pollen, here's a graph of cumulative grass pollen levels for Melbourne from October 1 to today. 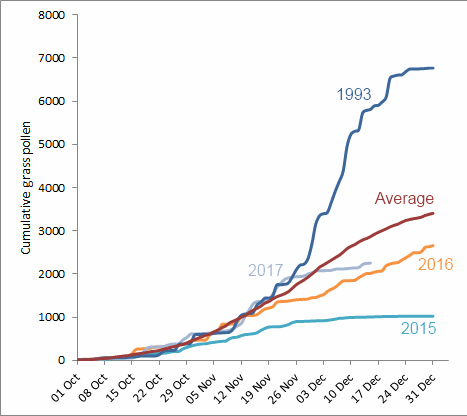 The current season is the grey line in the graph, the brown line is our average grass pollen season and the two blue lines are 1993 (dark blue), our worst season, and 2015 (light blue), which was the mildest season we've seen.

The 2017 season was tracking close to the 26 year average for Melbourne up until mid-November but it's more-or-less plateaued since then. This is almost certainly due to the warm finish we saw for November, which ranked as Victoria's second-warmest November on record.

At the moment it's looking like the 2017 grass pollen season is over although we'll continue to keep a watch on it through to December 31. 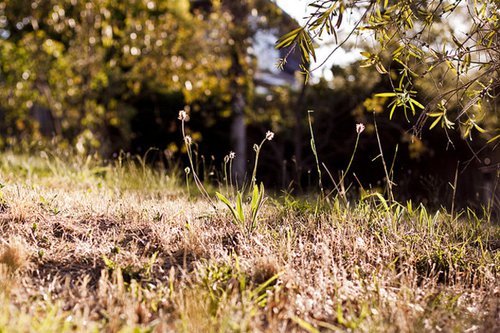