Past the half-way mark

We're half way through!

Here at the Melbourne Pollen Count we produce our daily pollen counts and forecasts every day from October 1 to December 31.

And so this week we've passed the half-way point of our counting season. There's only another six weeks to go.

As Craig Butt's article in the Age from last year shows, we're now at the peak of the grass pollen season with the prospect of fewer high days once December rolls around.

So hang in there. While the season's not done quite yet, in a couple of weeks you should start to notice more easy days and fewer sneezy days.

Thought I'd show you how the season is progressing using cumulative grass pollen counts from October 1. The current season is the red line in the graph, the blue line is our average season and the two dashed lines are 1993, our worst season, and last year, the mildest season we've seen.

Our next forecast HIGH day is Monday, which looks like being pretty nasty with strong northerly winds. 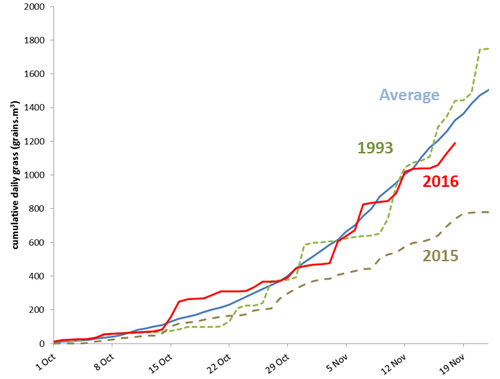