It’s 2020 and of course things were going to happen differently. 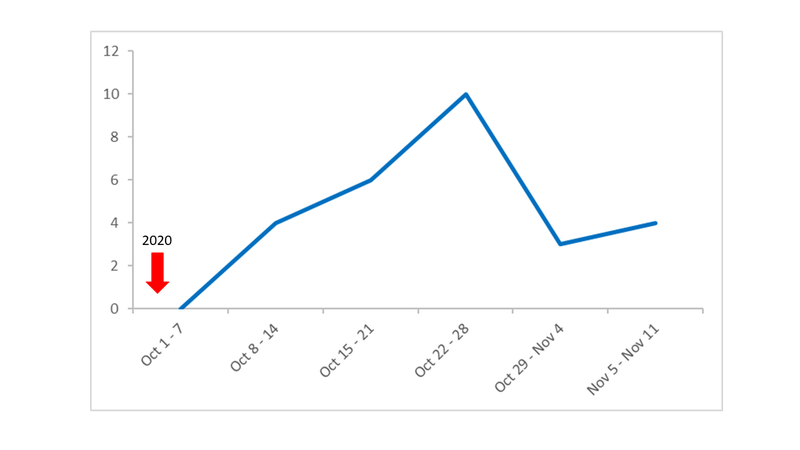 Inevitably, 2020 is a rule breaker. With grass pollen as with so much else.

Why do I say this?

Well, although we start our pollen count on October 1 we don’t expect to see much grass pollen until later in the month.

We spend this time figuring out when we’ll get our first high grass pollen day – that’s a day when the average concentration of grass pollen in the air is 50 grains per cubic meter or more.

And people generally notice when the first high day happens because their symptoms suddenly get much worse, sneezing, itchy eyes and all that.

But getting the first high day right is frankly pretty hard.

Today’s graph shows when Melbourne’s first high grass pollen day has happened for the past 27 years, from 1992-2019.

Mostly this date is in the third or fourth week of October. And sometimes it doesn’t happen until November.

But it’s never happened in the first week of October before.

Never happened until this year, that is.

An earlier start can mean a season with more bad days for people with hay fever and asthma.

Not always, but three of the four years when the first high day was in the 2nd week of October had above average numbers of high grass pollen days.

But 2020 is a rule breaker and maybe that’s another rule destined to be broken.

So, get prepared for the 2020 grass pollen season.

We’ll be providing a grass pollen count and 7-day forecast daily through to the end of the year.